Princess only allowed each Platinum & Elite guest to use one device for the complimentary Medallion.Net so I’m typing everything on my phone which is not as easy as using my computer. I’ll just do a shorter version here & update it when I get WIFI at home.

This morning we left the hotel at 11:30 am, called a taxi & paid $7.30 to get to the port. A port shuttle from the hotel cost $6 per person, which was very expensive compared to going by taxi. Besides, the shuttle didn’t stop at just the Princess pier but to all piers where there were ships docked. Today there were Carnival Conquest & RCI’s mega ship Harmony of the Seas.

We arrived at the Terminal at 11:50 am & stepped inside the beautiful Caribbean Princess at 12 noon. The whole check-in process took only 10 minutes. We went to the dining room for lunch & it was only half full. I gathered that most people went to the buffet & many tried the new dining venues Plank BBQ & Steamers Seafood.

Our stateroom was ready at 1 pm & our luggage was delivered at 2 pm. Then we went to the spa to do a tour, booked some embarkation specials & went to the muster drill at 3 pm. Our muster station was in the Princess Theatre.

Then we went back to the stateroom to unpack. Here is a video of how I used the cruise card to operate the Ocean Medallion pad to open the door:

The WIFI was very good so far, probably because not that many people were using it yet. It was $9.99 per day per device if you want to pay, which I think is quite reasonable.

This is our 1st time staying in a balcony stateroom. For all the Princess cruises that we went on, we have always stayed in a suite. The room is even smaller than our Crystal river cruise suite & doesn’t have a sofa. I think this is the smallest stateroom that we’ve ever had out of the 30+ cruises that we have done. 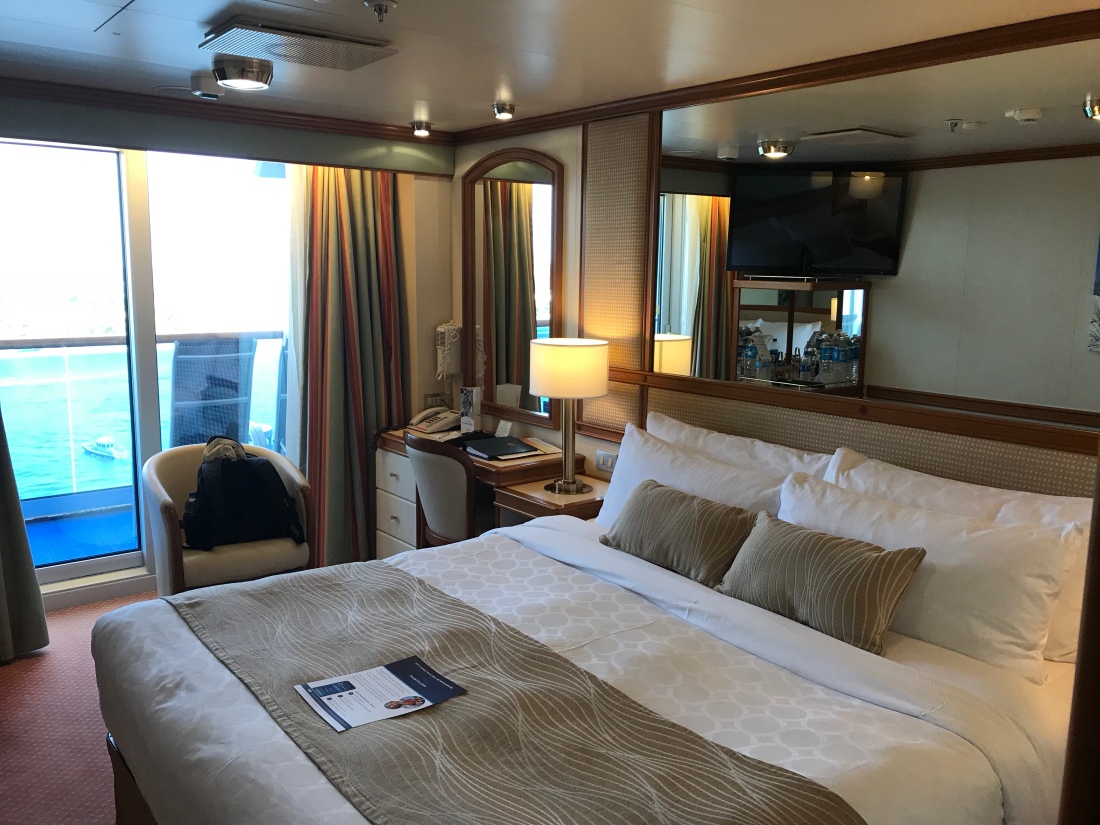 After unpacking we went to the Palm Dining Room on deck 6 aft for traditional dining. The food was the same as the other dining rooms, just a different location. The service was very good and the prime rib that I had was juicy & tender.

After dinner we went to the spa for our treatments. My husband had a Man’s Package (3 treatments for $99) & I had a seaweed massage $209 for 100 minutes ($50 discount). The spa was beautiful. This is the locker area:

And this is the treatment room:

The waiting area is big:

We missed the Opening Broadway show because of the spa service. We spent the rest of the night at a few bars & went to the buffet to get some fruit before it closed at 11 pm. DH got 2 slices of pizza from Slice. We were all satisfied after the late night snacks before going to bed.