With $200 credit from United Airlines that we had to spend within one year since last August, plus $200 travel credit from American Express, we decided to take a short relaxation cruise to W. Caribbean this summer, with most of the airfare covered by the travel credits. The cruise is another deal with less than US$1,500 for 2 people in a balcony room (refreshment drinks package, tax and gratuities included). Since we are Princess Captain’s Circle’s elite members, we have perks like free internet minutes, priority embarkation & disembarkation, free laundry & dry cleaning and free mini-bar (1-time set up at the beginning of the cruise, will have to pay extra if replenishing is requested).

While we had those lovely perks, we also had to agree to some of the airline restrictions in order to use them in the most economical way. One would be to fly with connecting flights very early in the morning.

This morning we woke up at 4:30 am to get out of the house at 5 am, so we could arrive at the airport before 6 am for our 8:18 am flight. We did well and was able to get to Toronto Park ‘n Fly Valet Parking at 5:45 am, then at Pearson’s Terminal 1 at 5:55 am. Although there were lots of people at the terminal, we had priority boarding, so check-in and immigration were quite easy for us. We were at the Maple Leaf Lounge having our breakfast at 6:45 am.

The first United flight to Chicago was very on time and the plane was in the air 20 minutes after take-off. We paid $19 to have our seats upgraded to Economy Plus on row 7. Those were wonderful seats with extra legroom (almost 3 ft. from seat to the pouch containing airline magazines and safety cards). The best thing about this bulkhead seat was that I could still put my little backpack under the business-class seat in front of me, as the bulkhead didn’t go all the way down to the floor. We even had more legroom than the those in the business class. Here is a picture to show how much legroom we got on United 737-800:

Tips for travellers on short haul flights (less than 5 hours): Rather than paying for business or economy plus when you purchase your tickets, wait till you check in and there are always cheap upgrades that you can get. Even if there is not, no big deal because the flight duration is not long. I’m always the first one to check-in right at the second that online check-in becomes available and about 80% I could get the seats with extra legroom. For this flight I paid $19, for the flight from Chicago to Fort Lauderdale, I paid $39. For those who don’t have priority boarding, pay $30 to have United Airline’s premier access so you could skip the line to the front of security and have priority boarding. It’s totally different for long flights. I always book a year in advance and pay extra for the bulkhead seats. There is no chance to get those seats during check-in. One disadvantage of having those seats will be that you CANNOT put anything in front of you during take-off and landing, as there is NO seat but just a partition in front of you. All hand luggage & purse must be put in the overhead bin. It might be inconvenient for some people.

Back to the connecting flight, it was delayed for over an hour. Although the next plane was in the same terminal as the first flight and only 3 gates down, there was NO airline lounge that we could go to. We only have access to Air Canada’s Maple Leaf Lounge and Priority Pass Lounges and there are all in Terminal 5 (International). The flight was delayed due to the late arrival of the incoming one. UA was super efficient as the flight arrived at the gate at 11:50 am and we took off at 12:30 pm.

We had the same seats on Row 7 but the flight was a different model, an airbus A320. Other than the extra legroom, there was a partition that separated the economy plus and the business class seats.

We didn’t have to put 2 bags under 1 business class-seat like in the earlier one, but we each had our own space for our backpacks.

Only Rows 1 to 21 had in-seat power plugs for charging mobile devices. Row 22 + was the economy section and there was no charging facility. Make sure you charge up your electronic devices if you plan on using them during the flight. It’s better to download United Airlines Entertainment App at home when you have good WIFI service rather than doing it here on the plane.

We landed at 4:26 pm, got our luggage at 4:50 pm and took a taxi for $12.10 fare + $3 airport charge + $1.90 tip ($17 total) to our hotel, Four Points by Sheraton Fort Lauderdale Airport and Cruise Hotel. He booked this hotel mainly because I had an SPG reward night that’s only for a Category 4 hotel. There are only 2 that are close to the cruise port but this one is closer to the airport. I didn’t opt for a free hotel airport shuttle as it only runs on the hour. It’s better to get to the hotel earlier to rest after a whole day of travel.

Although it’s a small hotel, the front desk personnel Jason & Tabitha were very nice and friendly. Even the cleaner and the bar tender said hello and made us feel really welcomed. Our room is on the second floor which is really basic and old, but it’s free and we’re only here for 1 night, it’s okay since it’s quite clean. There was a very old-fashioned safety deposit box about 2-inch deep in the closet, so we locked our passports and money there before stepping out for dinner.

Originally we wanted to walk to a nearby seafood restaurant (0.7 mile away) highly rated by TripAdvisor, called Kelly’s Landing New England Seafood, but it started to rain and it was very windy, so the hotel called us a taxi for $6 to get there. The food was very good, especially the appetizer New England boiled clams in broth and butter, so fresh and delicious! 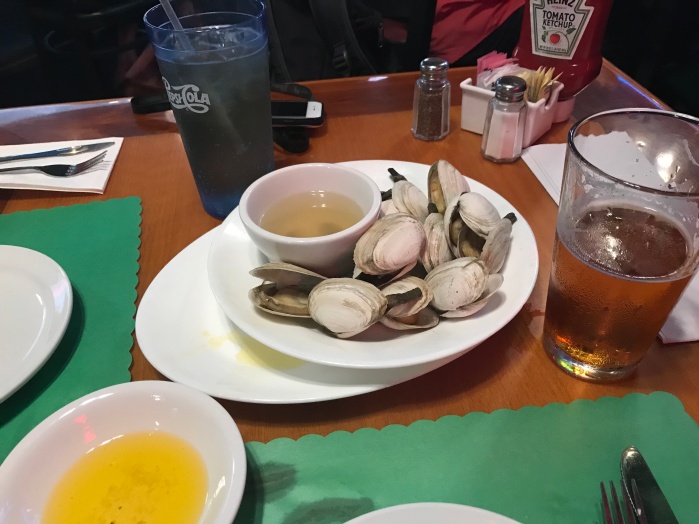 The clam chowder was excellent but the lobster bisque was a bit too buttery for me. I had a lobster roll with sweet potato fries and my husband had fish and chips, both very good. 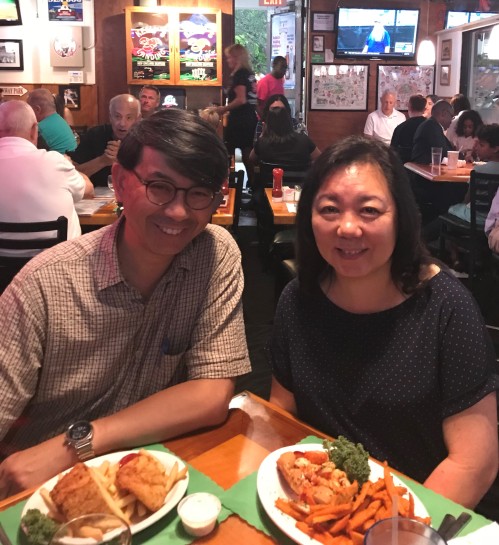 Since it was not raining when we left, we took a 15-minute walk back to the hotel, then went to the bar to enjoy our free drinks ($15 or less) as an SPG Gold member welcome gift. It was only 10:15 pm when we retired to bed. Looking forward to getting on board the Caribbean Princess tomorrow!